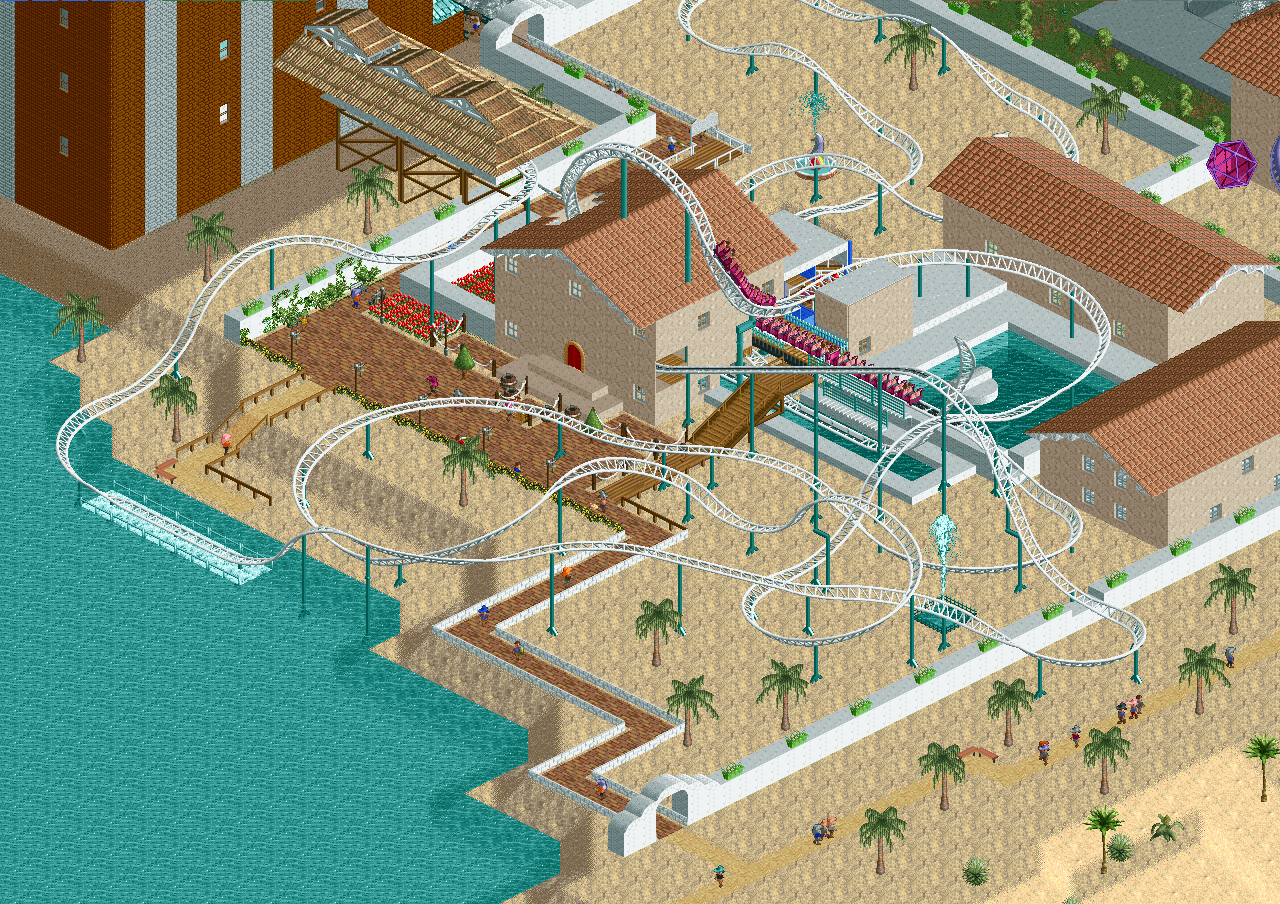 When I’m not out experiencing the theme parks of the world, I’m often sat at home building my own on a computer – there really is no escape for me. You can find links to further details of my more recent projects below, followed by a brief(?) history of my experiences with coaster gaming. 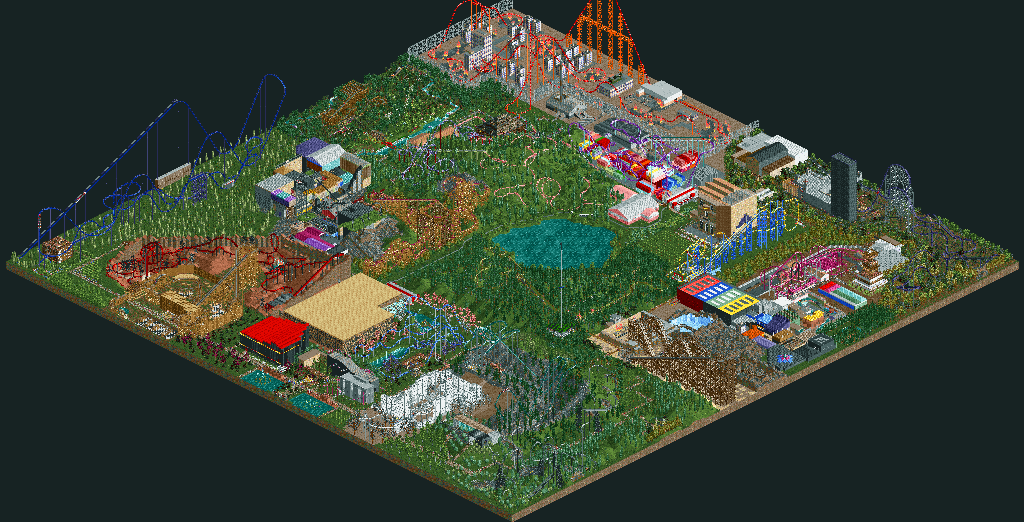 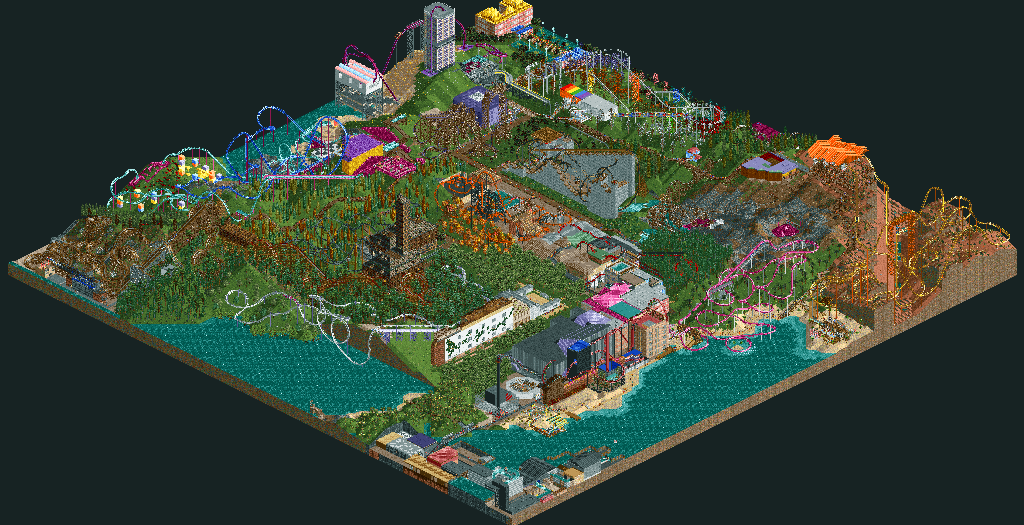 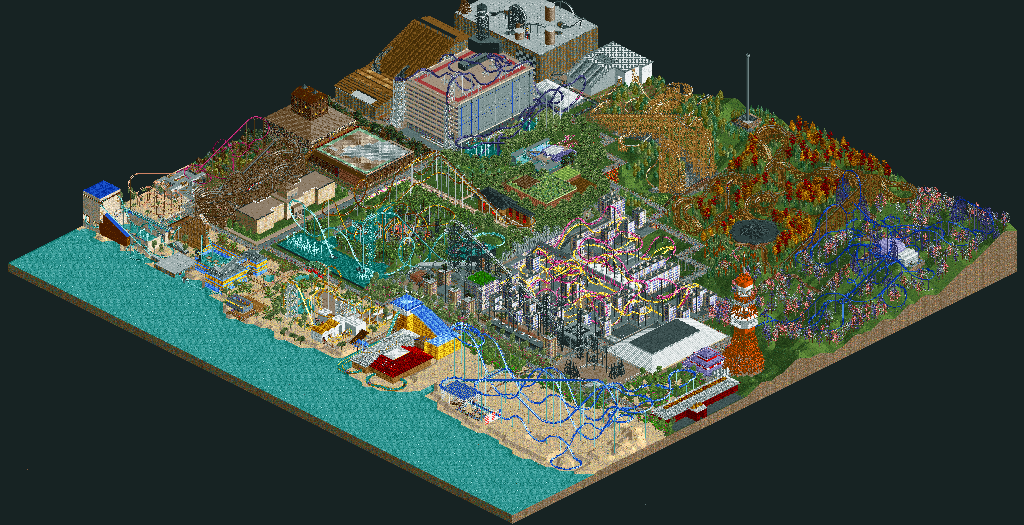 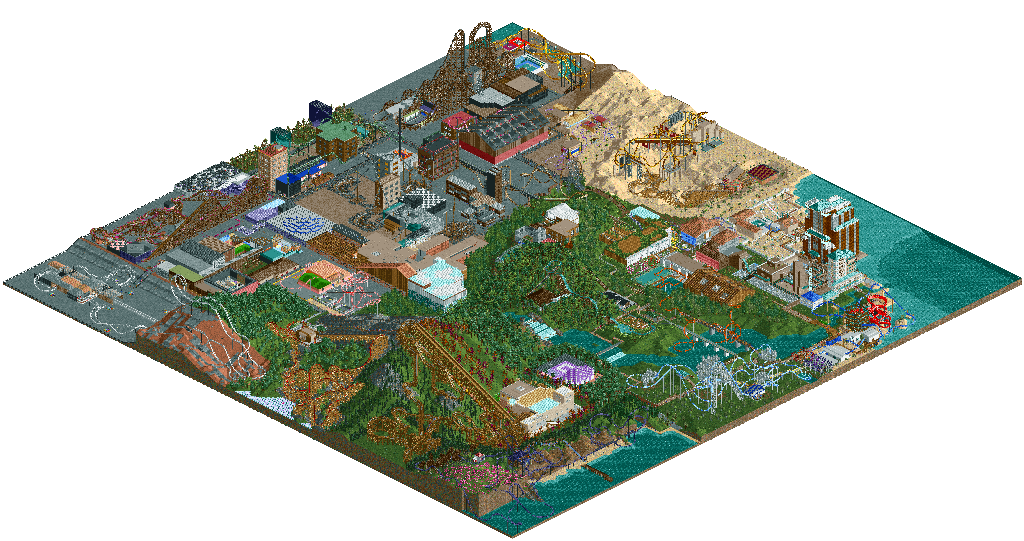 The original Rollercoaster Tycoon was of course an early inspiration for me, likely playing at least some part in how I became so obsessed with this hobby in the first place. It had all the classics on it like Forest Frontiers, Dynamite Dunes and Razor Rocks. Remember those?

Trouble is I wasn’t very good at any part of the game at a young age. I couldn’t make either consistent money or competent rides and never progessed very far into depths of the unlockable scenarios (still the best aspect of the original game). With these failings, I longed for a more free reign approach to the construction to hone my skills.

Sandbox came of course with the sequel game Rollercoaster Tycoon 2, but all the money in the world couldn’t help me make a good ride and my time spent on here was fleeting at best.
I managed to dig out these old maps of mine and it’s fascinating to see the style of build at the time. The efficiency in old (young) me seemed to believe that the best rollercoasters were the ones that made the most of their potential energy – going on as long as physically possible with the gravity available.
Sound alright to the casual player? Well the problem with these are that every high point is taken at a snails pace, everything just barely makes it to the next section and it’s done with almost clinical calculation – if the last three hills were 45ft then have to make the next three 25ft. I can’t help but cringe a little when I watch the rides in action.

Rollercoaster Tycoon 3 came out a while later and the fact you could do real POVs was massively exciting, for about half an hour. I didn’t really get on with the 3D cartoonified look and feel of this sequel and it’s never interested me since.

As some sort of redemption mission I went back to the original game as an adult and finally took it to 100%, practicing and improving with every build along the way. How long before I make a page with all of those parks on it?

I’m unsure on what specifically sparked my resurgence with RCT2 but I can pinpoint the major dose of inspiration and it actually came from music. Everything I had ever done in the games before lacked direction or purpose, they were just aimless casual builds and that’s fine, but it didn’t excite me enough. The whole point of theme parks is the theme and my personal solution to driving that ended up being to combine it with another significant interest of mine.

Some time around 2015 I got into an album called Endless Fantasy by Anamanaguchi. Google tells me they’re a ‘chiptune’ band – mostly instrumental, could easily pass for computer game music. Something about their songs put ideas in my head. Ideas that I only knew how to express through the medium of a rollercoaster game of course. The images they conjured in my mind – I figured I could turn these into themed coaster experiences. Dark rides too.

The stepping stone park was born, the first with any real passion and flair in it. Every attraction I’ve ever created in the game since this moment has been inspired by music and I honestly can’t picture it any other way now.
I have daydreams of how I would create the greatest coaster experience in the world and I can tell you now, it’ll go on for at least 3 minutes and be synced and themed to an amazing piece of music – generating two euphorias in one. A new bar will be set, rides will cost 10x as much to make and everyone’s personal tastes will be far too specific to enjoy them on the same level, but it’s the future, I swear.

Another significant thing about 2015 is that it was my first proper year of theme park travel. I was now seriously into this business and found that the physical experiences fundamentally changed the way I played the game. For a start, I now knew what airtime was (thanks Goliath).
Weird as it may sound, I could actually feel how these rides on the screen would behave in real life as I watched them. I could anticipate the sensations and use that as a basis to build anything and everything that I wanted to exist in real life. It was time to take pride in the layouts.

Triple whammy for 2015, the year I got into K-Pop. To say this was life changing is an understatement but that’s a story for another time, perhaps never. The relevance here again is the music and, more specifically, the often elaborate music videos that accompany the genre. The visuals in the stepping stone park were coming straight out of my head, but now I had proper themes, proper visual inspiration for a multitude of new rides and something to get truly excited about. It doesn’t stop giving either, there are always new songs coming out and new ideas to go with them.

Phase 1 began the following year, in vanilla RCT2. I soon found that with all the modern ride types from the real world that I wanted to create in a game from 2002, there were of course limitations. Experimentation began, slowly and steadily, using a piece of hacking software called the 8 car trainer. Simple changes like being able to mix and match different trains with different tracks and make launch pieces out of a chain lift set to any speed opened the door into a far more complex world, but it was so painful to use. It ran in a separate window, regularly caused crashes and any ride that wasn’t operating as the game originally intended would constantly break down. I have at least 20 different versions of this map backed up just in case anything got permanently broken.

Towards the end of that park, I made the transition into OpenRCT2, a downloadable open source version of the game that over time has made so much more possible with the same basic software. All of the functionality of what I was doing before is fully integrated and accessible with the click of a button or two. A few wonderful creators and contributors over the years have added to the roster of vehicle types available in the game, but there’s still plenty more on my personal wishlist. After using this version to refine the original park it was time to embark on the next phase to keep improving my work.

I’ve been making these parks at the rate of about 1 per year ever since and it’s been quite a staggering time commitment. I do really enjoy it, though it can be stressful getting certain attractions working just how you want them to. When the stars align, some rides just build themselves and it becomes a form of relaxation, even an art form. Some people have their painting or sculpture, I’ve got my RCT scenery to build.

I’ll happily admit I’m nowhere near the best at scenery, there are always going to be limitations with scaling and the isometric views. Sometimes I just have to say no to myself, this one is taking up too much time and there’s diminishing returns on making it look right. It conveys the gist of what I was aiming for, that’ll have to do.
Where I think the main strength of these creations lies is in the ride layouts themselves and the way they ride. I’ve seen a lot of other amazing work out there that swings the other way. Visually stunning, but as I watch and do my weird thing of feeling it, nothing quite flows the same and I can get as picky as I do about the real things.

There’s a reason I’m behind the curve now, stuck on RCT2. What about Planet Coaster and No Limits? (Let’s just agree to not even mention RCT4). It links back to the time commitment I mentioned and the return on investment on how quickly I can build an idea vs how satisfied I am with the end result.

I do own No Limits 2, it’s a stunning piece of software and I have dabbled in a couple of projects of my own on there but it just takes so long to get the bare bones of the coaster right. Scenery is doable to an extent with trees, rocks and landscaping, the POVs could easily be real life when you do it properly, but there’s just no way I can make anything as striking and ambitious as a K-Pop video with it. Every single thing would have to be 3D modelled and built from scratch, by me. That’s just not going to happen and I’d never be able to truthfully say I’m happy with the final package.

I was excited in the build up to Planet Coaster’s release, it appeared to be a happy medium between the two. Fully flexible coaster creation with POV capabilities and a much more vast and user friendly scenery implementation. I tried the game and sadly just didn’t like it. For me it acts as the worst of both worlds – it still takes forever to build and fully theme a ride from every angle and never to the point of complete satisfaction. Driving these games to a higher level of detail demands so much more attention to the look and feel of an attraction and I know for a fact I’ll never feel like I’ve done something justice in that format without boring myself to death and losing interest in the process.

Worse still, the POVs just ain’t all there. Whether its the track implementation or the physics engine, watching a ride in Planet Coaster just feels all sorts of wrong to me. That transition is wrong, that movement is wrong, that’s not what it’s like in real life and I’d rather stick to the blissful ignorance of my 2D world.
If you come across an example that you think can change my mind, I’d love to see it. For now I’ll keep living in 2002.